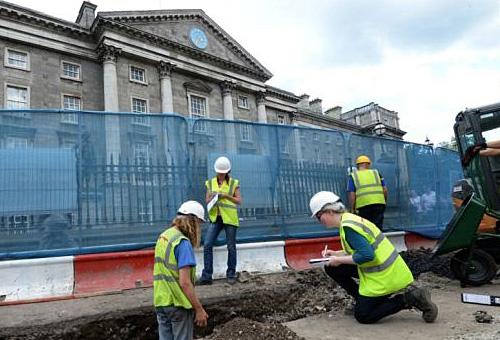 Roads, Railways and Bridle Paths in the Central Connemara Valley

A Nine-Thousand-Year Long Story. Archaeological Discoveries Along the Route of the M11 Gorey to Enniscorthy Motorway.

Archaeologists revealed more than 100 previously unknown sites between Gorey and Enniscorthy. Find out more about the discoveries and see some of the objects uncovered at the ‘pop-up museum’.

Jerry O’Sullivan will lead a field trip exploring some of the highlights of the central Connemara valley, (own car is essential and car sharing is encouraged, please bring strong shoes / boots, a rain jacket and hat, sunscreen and a picnic lunch.)

Organised in association with Kildare County Council and the Kilcullen Heritage Group ndunne@kildarenrdo.com 045898199

Archaeology from the Air: New Archaeological Discoveries from Lidar Data

From as far north as Lough Derg near Nenagh to the River Suir in Cahir we will explore the archaeological discoveries on the motorways of the county.

Pollen, Peas and Pigs – How Palaeo Scientists and Archaeologists Reconstruct the Landscapes and Lives of the Prehistoric Past

Archaeology involves reconstructing our ancestors’ lives. But not all the evidence is visible to the naked eye. Find out in this 'hands-on’ event how microscopic remains help us understand the past.

The TII are industry partners with UCC School of Archaeology for the Heritage Council’s INSTAR project “Settlement and Landscapes of Later Prehistoric Ireland” caitlin.nagle@ucc.ie

Jason Bolton will deliver a modern perspective on medieval fortifications

A Souterrain at Releagh – Discovering Hidden Heritage in South Kerry

In April 2015 the discovery of a souterrain between Kenmare and Glengarriff hit the headlines. This is an opportunity to hear about the discovery and south Kerry’s rich early medieval heritage.

Join us for an afternoon of archaeology, history and costume as we explore the not-so-hidden history of medieval Buttevant. Events will include reenactments, talks, tours, music & face-painting.

The Romans never made it to Ireland…or did they? Visit the Roman military camp & hear archaeologists talk about the discoveries that show the close connections Kilkenny had

with the Roman world.