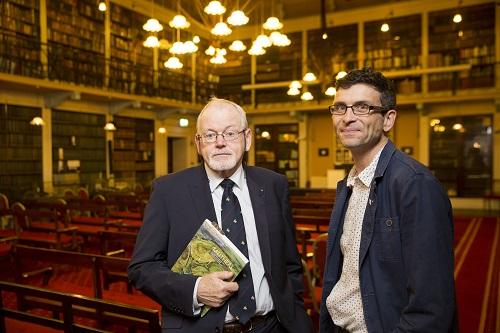 On 12th December 2016, professional colleagues, friends and family gathered to enjoy the grandeur of the Royal Irish Academy, 19 Dawson Street, and celebrate the publication of Meitheal: the archaeology of lives, labours and beliefs at Raystown, Co. Meath by Matthew Seaver. Professor Michael Ryan, former Director of the Chester Beatty Library and a former President of the Academy, launched the latest archaeology book from TII Archaeology and Heritage, and heaped warm praise upon the lead author.

Meitheal relates the story of Raystown in County Meath; a site that was lost for 1,000 years, until it was rediscovered by geophysical survey as part of archaeological investigations along the M2 Finglas–Ashbourne road project. Excavations carried out over a year revealed that Raystown began as a cemetery in the fifth century AD and evolved over the next 200 years into a large farming settlement surrounding the cemetery. In the eighth century the site developed further into a milling centre and continued in use for another 400 years. The book also describes the large number of artefacts recovered, some of which testify to personal moments—a ringed pin from a cloak accidentally dropped into the swirling waters under a mill—while others indicate that Raystown was connected to a trade network with Anglo-Saxon England and the European mainland in the fifth to mid sixth centuries AD.

Meitheal, which is published by TII, is the fourth volume in the TII Heritage series. It is available through bookshops or directly from Wordwell Books (Unit 9, 78 Furze Road, Sandyford, Dublin 18; tel: +353 1 2947860; e-mail: office@wordwellbooks.com).