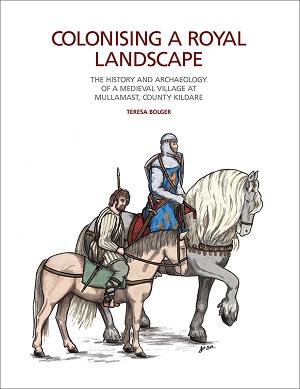 The investigation of a lost medieval village on the M9 motorway in County Kildare has provided the material for a unique story in the Irish archaeological record. In Colonising a Royal Landscape: the history and archaeology of a medieval village at Mullamast, County Kildare readers will learn about the hobby, a small agile horse bred for raiding and scouting in time of war and the specialist light cavalry called hobelars, who rode them. There is evidence from the settlement at Mullamast for other aspects of medieval Irish life also. Cattle, sheep and pigs were reared and, variously, milked, sheared or slaughtered for their meat and hides. From the evidence for harvesting and processing cereal crops it is clear that arable farming was important too. But the distinguishing feature of this settlement is the unusually high proportion of horse remains in the animal bone assemblage recovered by the archaeological excavation of the site and, especially smaller horses corresponding in stature to the hobby. It seems that the medieval village of Mullamast is now the first attested stud farm in the long history of horse breeding in County Kildare and was a place where the villagers specialised in horses bred for war.

The excavation of the site at Mullamast was directed by Angus Stephenson and the village’s story is now told in Colonising a Royal Landscape, written by Teresa Bolger of Rubicon Heritage Services Ltd. Technical reports relating to the excavation of the medieval settlement and other sites in Mullamast townland can be found on a CD-ROM accompanying the publication. The new book, published by TII in late December 2017, is now available in bookshops and can be ordered online from Wordwell Books.