Until recently, few people had heard of Gortnacrannagh in County Roscommon. Then, in early August 2021, archaeologists announced they had made startling discoveries during an excavation of what appears to have been a prehistoric sacred bog in the area, prompting national and international news coverage. These discoveries included a large wooden pagan idol and ritually deposited human and animal bones. While post-excavation analysis has yet to be completed, Dr Eve Campbell, who led the dig, recently joined Fin Dwyer for an exclusive interview on the Irish History Podcast. Eve reveals what they found and, more importantly, what it tells us about the belief systems of our distant ancestors. 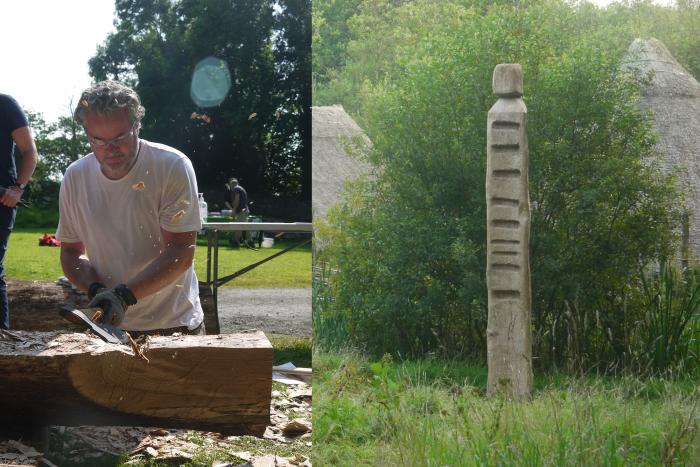 Woodworker Mark Griffiths carving the head of a replica of the Gortnacrannagh idol (left) and the completed replica erected in the Iron Age garden at Craggaunowen, Co. Clare (right).

This site, designated Gortnacrannagh 7, was discovered by AMS Ltd during advance archaeological testing on the route of the planned N5 Ballaghaderreen to Scramoge Road Project on behalf of Roscommon County Council and TII. Advance testing and excavation of 101 sites took place over two years and was completed in July 2021. The post-excavation analysis and reporting phase of the project is now underway.

You can find out more about the N5 archaeological works on the AMS Ltd YouTube channel.