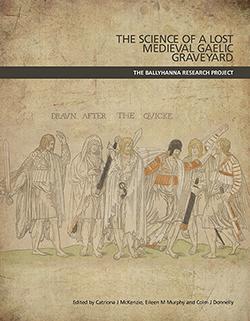 The new book, the second publication in the TII Heritage series, tells the story of the discovery in 2003 of a graveyard and church at Ballyhanna, in Ballyshannon, Co. Donegal, as part of the N15 Bundoran–Ballyshannon Bypass archaeological works. This led to the excavation of one of the largest collections of medieval burials ever undertaken on this island, representing 1,000 years of burial through the entire Irish medieval period. The discovery led to the establishment of a cross-border research collaboration—the Ballyhanna Research Project—between Queen’s University Belfast and the Institute of Technology, Sligo, which has brought to life this lost Gaelic graveyard.

The Science of a Lost Medieval Gaelic Graveyard is about a community; about their lifestyles, health and diet. It tells us of their deaths and of their burial traditions, and through examining all of these aspects, it reveals the ebb and flow of their lives. The book is accompanied by a CD-ROM which includes supplementary information from the research project and the original excavation and survey reports for all of the archaeological sites encountered on this road scheme.

The book can be purchased online through Wordwell Books priced at €25.