In June 2017, TII in collaboration with the Digital Repository of Ireland (DRI) and the Discovery Programme, formally launched the TII Digital Heritage Collections. The Collections contain hundreds of archaeological excavation reports, as well as papers from TII seminar proceedings, audio books, and short videos. All of these digital resources have been securely preserved and made available to view and download from the DRI—a national digital repository for Ireland’s humanities, social sciences, and cultural heritage data. The Collections are continually expanding, particularly with the addition of newly available excavation reports. The most substantial new resource in the Collections was added in November 2018 and comprises more than 170 archaeo-geophysical survey reports, formerly held on the now defunct NRA Archaeological Geophysical Survey Database website. The new archaeo-geophysical survey sub-collection has safeguarded the legacy of the NRA Archaeological Geophysical Survey Database, preserving this important material for future re-use and providing a secure online repository that will grow as new reports become available.

Last September, Shane Carey of GSI gave a presentation at the National Roads Conference 2018 in Wexford town on the latest developments relating to the Open Topographic Data Viewer—an online archive of aerial laser surveys that went live last April. The latest update to the Viewer features a significant increase in the available data, contributed by TII, which greatly amplifies the nationwide impact of this new resource. The Open Topographic Data Viewer project is a collaboration between GSI (a division of the Department of Communications, Climate Action and Environment), the Department of Culture, Heritage and Gaeltacht’s National Monuments Service (NMS) and National Parks and Wildlife Service (NPWS), The Discovery Programme, and TII, within the remit of the Heritage Council. These organisations are keen to make all of their high-resolution topographic data freely available. 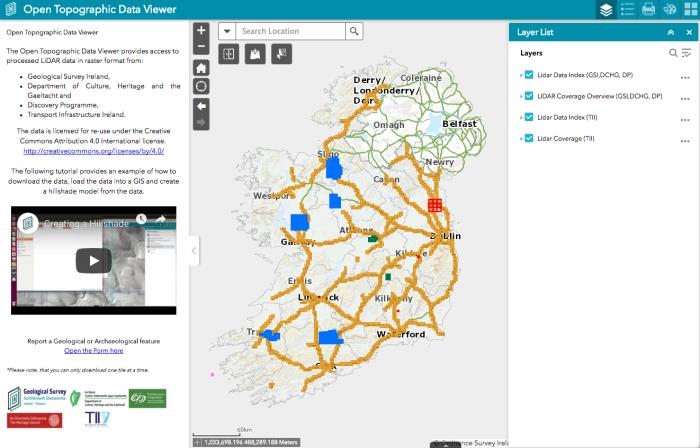 The Viewer provides access to processed LiDAR (light detecting and ranging) data in raster format, which is licensed for re-use under the Creative Commons Attribution 4.0 International license. The benefits of LiDAR data and its derived high-resolution topographic data are already widely recognised, with uses including highly detailed mapping of natural and man-made surface features, flood assessments, habitat mapping, and forestry resource assessments. The TII data derives for an aerial laser survey of the national road network conducted in 2010/2011 for the purpose of creating strategic noise maps. This was in line with its obligations under EU Directive 2002/49/EC relating to the assessment and management of environmental noise on all roads carrying in excess of three million vehicle passages per year. The captured data is at a resolution of two points per square metre but, owing to overlapping flights paths, the resolution is greater in certain areas.

Dr Vincent O’Malley, TII Head of Environment, hailed the collaboration that is now facilitating the re-use of the TII-commissioned LiDAR survey, stating that “wider access to TII data will be of great utility across the public and private sectors. It will help avoid duplication of effort, in addition to its inherent benefits to the environmental sciences and beyond.”

Rónán Swan, TII Head of Archaeology and Heritage, warmly echoed these sentiments, relating how portions of these data have been made available to researchers in a piecemeal fashion in recent years: “While the data was captured for non-archaeological purposes, it has proven to be of great utility for archaeological prospection and research. The newly available data represents a very rich resource for research and exploration throughout the country.”

Helen Hughes, TII Director of Professional Services, who facilitated the inclusion of these data sets on the portal, further noted that “the TII data represents a significant addition to this online repository and its accessibility there greatly contributes to the fulfilment of the Government’s open data policy and objectives. The re-use of public data being chief among these.”

The topographic data from GSI, the National Monuments Service, the National Parks and Wildlife Service, The Discovery Programme, and now TII, are freely available to download from the Open Topographic Data Viewer. GSI and TII are currently exploring the release of additional LiDAR data from TII and the next update is already being planned.