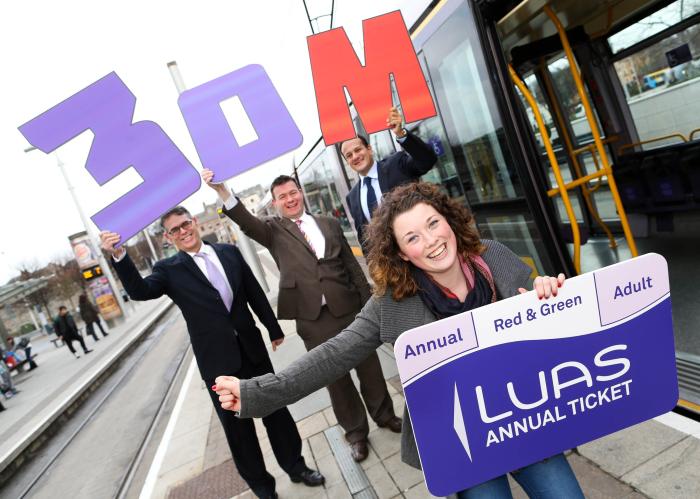 Minister for Transport, Tourism and Sport Leo Varadkar and Minister of State for Commuter Transport Alan Kelly have announced that 2013 has been the most successful year to date in terms of Luas passenger numbers.

The RPA and the National Transport Authority confirmed that, for the first time ever, Luas has carried more than 30 million passengers in a 12 month period. Passenger numbers are expected to reach 30.3 million by the end of the year.

To mark the occasion, the 30 millionth Luas passenger received an annual ticket for the Red and Green Lines. They were presented with the ticket at Heuston Station where Ministers Varadkar and Kelly joined the RPA and NTA for the presentation.

Minister Varadkar said: “Luas has been a success story from the start and has been taken to heart by passengers. It’s great to see Luas now having a record year with more than 30 million passengers. Luas does not require an operational subsidy and Dublin is clearly suited to light rail. Next year formal construction work starts on Luas Cross City, which will finally link the two Luas lines and fill in a major gap in our infrastructure. Luas Cross City will make Dublin properly connected and all sorts of new journeys will become possible.”

Minister Kelly said: "Luas is among the greatest success stories in the history of Irish transport. It shows that Irish people will use public transport when presented with a quality offering. The fact that it is has reached the 30 million passenger mark in a year shows that our economy is improving and that we are creating a better user-experience and more people are using public transport services. I look forward to seeing passenger numbers grow even further in future with a Luas cross city project connecting the existing Luas lines and extending services on the Northside,"

Luas passenger numbers have grown steadily from the arrival of the light-rail system in 2004. While passenger numbers dropped in 2008 and 2009, reflecting the general economic trend, they have been growing since then, partly due to the opening of three extensions in 2010 and 2011, grant-aided by the National Transport Authority, and also to the beginnings of an economic recovery.  RPA, who have been assigned the management of the Luas services by the National Transport Authority, also have been implementing a number of innovative marketing campaigns in a drive to grow passenger numbers, including our “Kids Go Free” campaign and reduced rates for use of Luas Park and Ride car parks.

The graph below shows the growth in numbers since Luas opened. 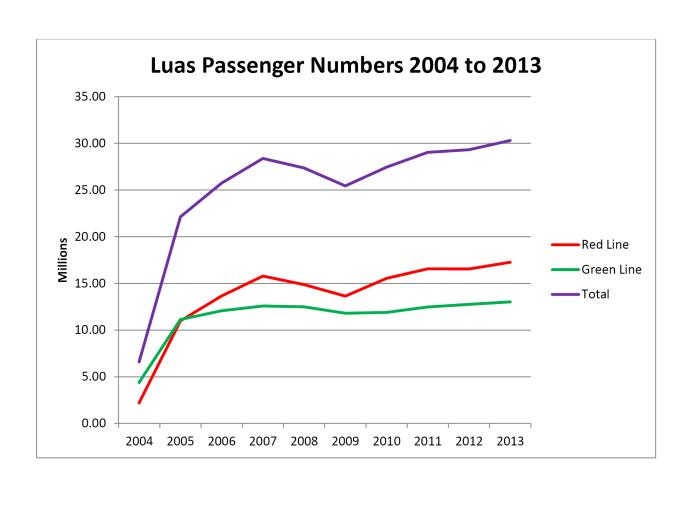 Welcoming these figures RPA’s Acting Chief Executive Rory O’Connor said that it was hugely encouraging to see Luas doing so well and praised the effort put into customer service by the staff of the Luas operator, Transdev. He noted that the common factor in the most successful cities is an excellent integrated public transport system.

Gerry Murphy, CEO of the National Transport Authority, said: “Luas is a key part of the city’s integrated public transport network. With a focus on customer requirements, the Authority has been rolling out a sustained programme of new initiatives, including the Leap Card, real time passenger information, Journey Planning Apps and new bus fleets.”

Download the Record year on Luas in 2013 Press Release.