In November 2017, two clusters of pits were excavated in the townland of Kilcolman, just south-west of Milltown, Co. Kerry, in advance of the construction of the N70 Kilderry Bends Improvement Scheme. The excavation was directed by John Olney for Archaeological Consultancy Services Unit (ACSU) on behalf of Archaeological Management Solutions (AMS). This was an area formerly within the Kilcolman Demesne, which belonged to the Godfrey family from the mid-17th century onwards, and had been subject to intense agricultural tillage, landscaping and drainage works. Given the known palimpsest of activity at this location, the discovery of several pits in an area crisscrossed with post-medieval ditches and field drains yielded some surprising results. 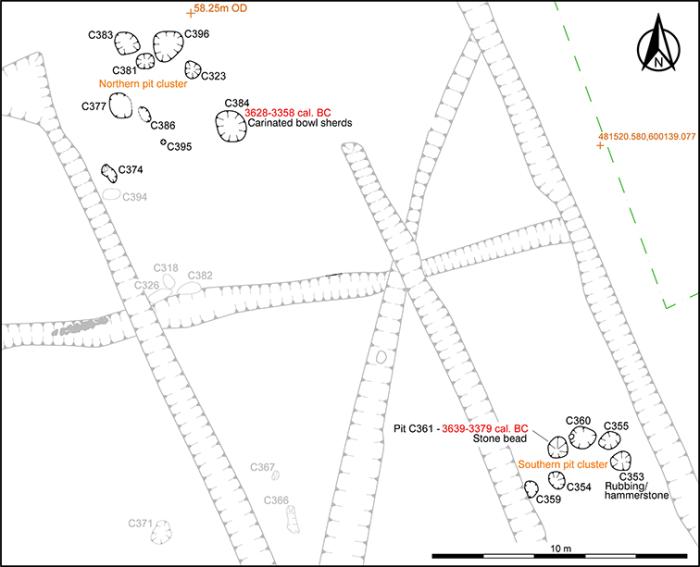 Located in the northern half of the site were seven pits, one post-pit and a stake-hole, while approximately 16 m to the south-east was a second cluster, comprising six pits. Five of the pits in the southern cluster were closely set, forming a semi-circular arrangement with a diameter of 3.2 m open to the south, with the sixth pit directly to the west. The pits in both clusters were similar in size (averaging 0.93 m in length) and were mainly sub-circular in plan with gently sloping sides, concave to flat bases, and surviving depths of 0.08–0.29 m. Across all the pits, six had just one fill, a further six had two fills, and a single pit in the northern cluster had three fills.

The fills were very similar, comprising charcoal-rich silty clay, many with small stone inclusions, charred hazelnut shells and whole nuts. The charcoal was analysed by wood specialist Dr Lorna O’Donnell, who determined that it was dominated by oak with a smaller amount of hazel and birch. A few pits within each cluster also contained very small amounts of willow, holly and pomaceous fruitwood (possibly representing mountain ash or hawthorn). All of the pits in the southern cluster and five in the northern cluster contained the remains of hazelnuts, ranging from just a couple of shell fragments to 22 whole nuts and 291 shell fragments in one pit in the southern cluster.

Two small and worn sherds of pottery were recovered from the secondary fill of a pit in the northern cluster. Pottery specialists, Dr Eoin Grogan and Helen Roche, identified these as carinated bowl ware, probably from a single vessel. Carinated bowls represent the earliest type of Neolithic pottery found in Ireland, with current dating falling in the period c. 3900–3600 BC. A hazelnut shell fragment from this pit returned a slightly later radiocarbon date of 3628–3358 BC. The fragmented and abraded nature of the pottery indicates that it was perhaps broken for some time and incorporated into midden (domestic waste) material that accumulated at the site. 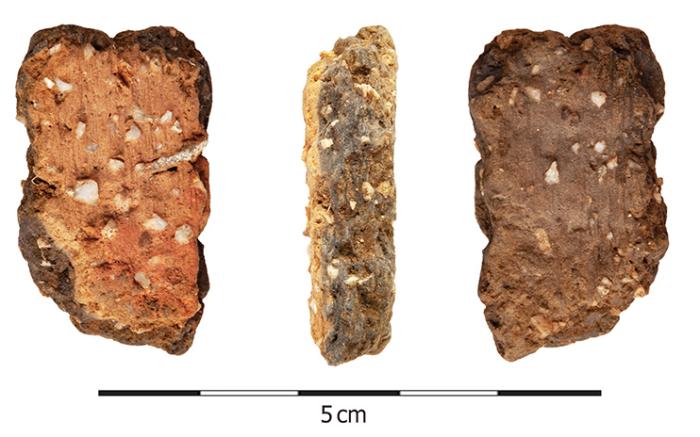 From the southern cluster, a small, circular and centrally-perforated stone bead was recovered from the primary fill of one pit, while a sandstone rubbing/hammerstone was recovered from the secondary fill of another pit. A hazelnut shell fragment from the same fill as the bead returned a radiocarbon date of 3639–3379 BC. According to geoarchaeologist Dr Stephen Mandal, the raw materials for both the bead (shale) and rubbing/hammerstone (sandstone) were most likely locally-sourced. The bead represents a personal ornament, perhaps one attached to clothing or strung to be worn as a necklace or bracelet, possibly originally with other beads, while the rubbing/hammerstone could have been used for grinding, crushing, pounding or hammering, perhaps even used to crack open the hazelnuts. 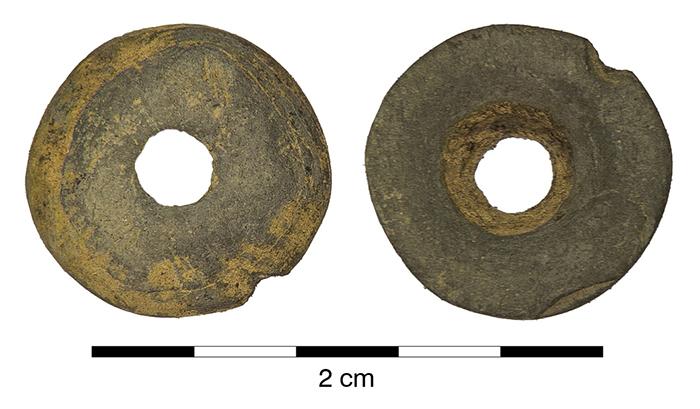 Pit-digging and deposition was a common practice in Ireland during the earlier Neolithic, with excavated examples known to contain a variety of cultural material—knapping debris, stone axeheads, complete and incomplete pots, burnt hazelnut shell and plant remains, charcoal, burnt stone, animal and human bone. The excavation at Kilcolman 5 is, therefore, an important contribution to understanding this region of County Kerry approximately 5,500 years ago. A little to the north-east of Milltown, two megalithic tombs—both likely to be portal tombs—are recorded in the townland of Killaclohane and it is possible that the activity at Kilcolman was taking place while these tombs were in use. Furthermore, excavations at Lissaniska ringfort to the east of Kilcolman 5, directed by Ed Lyne and also undertaken on the N70 road project, recovered a flint leaf-shaped arrowhead from an old topsoil horizon preserved beneath the ringfort bank. This artefact likely dates from the earlier Neolithic and may have been lost by somebody hunting in a waterlogged area that attracted animals in search of water.

The site at Kilcolman 5 was positioned between the River Laune, which meanders through Killorglin to the south-west, and the River Maine, which flows through Castlemaine to the north-east. Situated at approximately 55 m above sea level, just below the crest of an east–west ridge above the valley floor, the location offered good views of the surrounding landscape to the north and would have benefited from a range of nearby natural resources, from the rivers to the woodlands 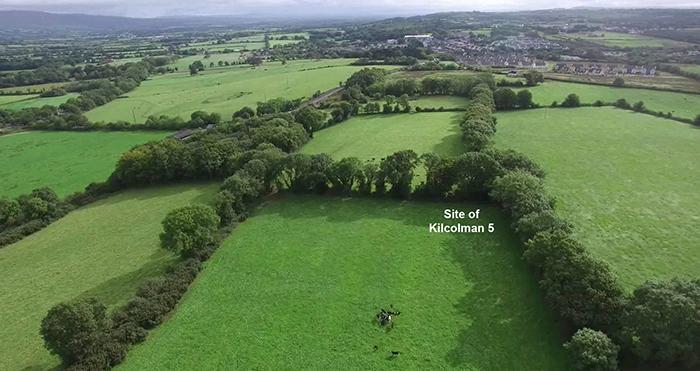 These pit clusters, containing artefacts, food waste and the residues of fuel sources, suggest the remains of a settlement site in use during the earlier Neolithic, at a time when it is likely that small-scale, dispersed social groups would have occupied Ireland. The arc arrangement of five pits in the southern cluster and the presence of a post-pit and stake-hole in the northern cluster does imply that these areas were sheltered in some way, albeit by a structural form that leaves little trace in the archaeological record. The multiple fills in just over half of the pits suggest they could have been in use over some time, with the composition of the fills indicating that perhaps they were only completely backfilled when the site was abandoned. Therefore, the pits discovered at Kilcolman offer a glimpse of the small-scale activity that was taking place here in the Early Neolithic, when the megalithic tombs at nearby Killaclohane were also in use as a focal point for the wider Neolithic community.

More information on all the sites excavated in advance of the construction of the N70 Kilderry Bends Improvement Scheme can be found in the scheme StoryMap From Milltown’s first farmers to landed gentry.