Story Maps combine the latest mapping technology with narrative text, images, and multimedia content to tell compelling stories. They are an ideal tool to communicate archaeological discoveries and have been used on a number of TII projects. The creation of this webpage is an initiative of the TII National Heritage Week Project 2020.

This Story Map, published by Transport Infrastructure Ireland in partnership with Cork County Council, commemorates the centenary of the War of Independence ambush which took place on 25 February 1921 at Cúil na Cathrach, in west County Cork. The ambush, involving an attack by Volunteers of the IRA Flying Column against members of the Auxiliary Division of the Royal Irish Constabulary, took place at a winding section of the old N22 road in the townland of Cúil na Cathrach, approximately 11 km west of Macroom town. The Story Map sets out the historical context of the ambush and provides a narrative on how the ambush site was selected, the ambush strategy, and how the ambush unfolded—including suspected betrayal by a saboteur. Detail is also provided of the two opposing commanders who found themselves in armed conflict by the fate of history. The Story Map includes historical photographs, interactive mapping and links to further reading and resources, as well as a noteworthy vignette of Irish film history.

This is the second Story Map published with respect to the N22 Baile Bhuirne to Macroom scheme (see below).

The realignment of the N73 between Mitchelstown and Mallow in north County Cork afforded archaeologists the opportunity to investigate in the heart of the Golden Vale, whose fertile soils have been cultivated for millennia. Excavations uncovered the foundations of a building erected by one of the Golden Vale’s first farming families almost 6,000 years ago in the Early Neolithic. Monuments marking the burial places of deceased members of the Bronze Age community, 3,000–4,000 years ago, were found at Clenor South. The N73 owes it origins to 17th- and 18th-century road developments. At that time, an enterprising blacksmith set-up a roadside forge in Clenor South to serve local farmers and passing travellers needing their horses shod or their coaches or carts repaired. These and other discoveries along the N73 feature in the Forging a Future Story Map prepared by TII and Cork County Council in partnership with TVAS (Ireland) Ltd.

From Milltown’s First Farmers to Landed Gentry: the archaeology of the N70 Kilderry Bends Road Improvement Scheme in County Kerry

Between September 2017 and May 2018, along a mere 2 km length of the N70 road realignment on the outskirts of Milltown, Co. Kerry, archaeologists uncovered evidence of human activity spanning 5,600 years. This included a Neolithic flint arrowhead and stone bead, a Bronze Age fulacht fia, and the remains of a 19th-century cottage. Most significant perhaps was the part excavation of a trivallate ringfort, known as Lissaniska, which is one of the few sites in ireland to have yielded direct evidence of early medieval flax processing. These discoveries are presented in this multimedia Story Map produced by Archaeological Consultancy Services Unit Ltd on behalf of Kerry County Council and Transport Infrastructure Ireland. Click here to access the From Milltown's First Farmers to Landed Gentry Story Map.

Living Between the Lakes: the archaeology of the N55 Road (Corduff to South of Killydoon Section A, County Cavan)

Living Between the Lakes, created by Archaeological Consultancy Services Unit Ltd in July 2020, is the latest Story Map showcasing the results of archaeological investigations on a national road scheme. Produced on behalf of Cavan County Council and TII, the Story Map relates the identification and excavation of five sites between September 2016 and February 2017 in advance of the construction of the N55 Corduff to South of Killydoon (Section A) road scheme. The Living Between the Lakes Story Map can be accessed here.

Digging Around Listowel: the archaeology of the N69 Bypass

In the summer of 2019 archaeologists from Archaeological Management Solutions investigated the route of the N69 Listowel Bypass on behalf of Kerry County Council and TII prior to the commencement of road construction. Archaeological Management Solutions created this multimedia Story Map in May 2020 to showcase the various results of their endeavours. Please click here to access the Digging Around Listowel Story Map.

The Archaeology of the N22 Baile Bhuirne to Macroom Road Development, in West Cork, Ireland

This Story Map outlines some of the discoveries made by archaeologists from Rubicon Heritage Services Ltd and TVAS (Ireland) Ltd along the route of the proposed N22 Baile Bhuirne to Macroom road development in West Cork. The investigations were undertaken on behalf of Cork County Council and TII. The N22 Baile Bhuirne to Macroom Story Map was compiled by TII Archaeologist Ken Hanley in August 2019 and can be accessed by clicking here.

Between the Lines: the archaeology of Luas Cross City

In August 2017, The Irish Times reported on the cultural heritage aspects of the Luas Cross City project in Dublin city, in an article entitled The lost history of Dublin uncovered by Luas works. This article was complimented by the creation of the Between the Lines: the archaeology of Luas Cross City Story Map, which offered readers a novel means to engage further with the discoveries that had been reported on.

An Archaeological Journey Along the Carlow Bypass

Fifty-seven archaeological excavations were undertaken by Rubicon Heritage Services along the route of the M9 Carlow Bypass on behalf of TII (formerly the National Roads Authority) and Kildare County Council. Rubicon Heritage Services created this Story Map in 2015 examining some of the discoveries, looking at them townland by townland, travelling from south to north, and exploring some of the specialist techniques used during post-excavation analysis. Click here to access the Carlow Bypass Story Map. 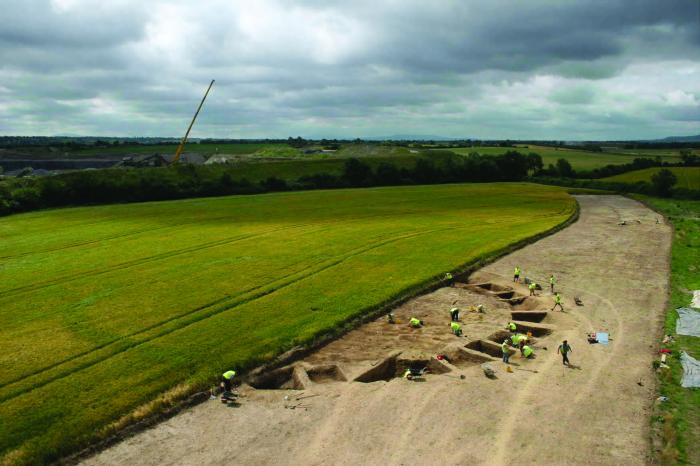