Transport Minister Leo Varadkar T.D. and Minister of State Alan Kelly T.D. were on hand at Saint Stephens Green to mark the tenth anniversary of the opening of Luas. The Green Line, which opened three months ahead of the Red Line was officially opened by then Transport Minister the late Seamus Brennan T.D. on Wednesday June 30th 2004 who predicted that the final jury verdict on what had been a somewhat controversial project would be delivered by the Luas users. How right he was! The official opening in 2004 was followed by four further days of free travel which was taken up by an astonishing 430,000 passengers.

Luas passenger numbers have grown steadily from the time that trams returned to Dublin in 2004 after an absence of 46 years. 22 million passenger trips were made in 2005 which was the first full year of operation and this has grown to over 30 million trips last year. While passenger numbers dropped in 2008 and 2009, reflecting the general economic trend, they have been growing steadily since then, partly due to the opening of three extensions in 2010 and 2011, grant-aided by the National Transport Authority, and also to the beginnings of an economic recovery. The network has now grown to a total of 37.2 kilometres and the Luas Cross City extension which will link the Red and Green Lines is currently under construction and will add a further 5.6 kilometres to the network when it comes on stream in 2017.

To mark the occasion of its tenth birthday Luas is running a competition over 10 days with a substantial prize on offer each day. In addition Luas staff will be popping up at various Luas stops throughout the Luas network on the 30th to celebrate the occasion with a cupcake party for Luas customers. Details are available on @Luas on Twitter.

In his remarks the Minister for Transport, Tourism and Sport Leo Varadkar, T.D. said: “Luas is ten years old and has been a phenomenal success. Thirty million passengers use Luas every year and it operates without a Government subsidy. The Luas Cross City extension should add another ten million passengers a year and in future we can hopefully add other lines as well.”

Alan Kelly T.D. Minister of State added: “This is a hugely important milestone in Irish public transport. Luas has been one of this country’s most successful projects and I look forward to its future growth and development at the core of Dublin’s public transport network for many years to come.”

Rory O’Connor, Acting Chief Executive of the Railway Procurement Agency said: “The first ten years of Luas has been a remarkable success story, better than anyone expected, and with the construction of the Luas Cross City line now well under way, we are looking forward to even greater success over the next 10 years as the Luas network expands and brings other Dublin communities into the network.”

Anne Graham, Director of Public Transport Services, National Transport Authority said: “Luas has been a key contributor to the improvements in Dublin’s integrated transport offering over the past decade, alongside Real Time Passenger Information, Leap Card and better bus route networks. Luas is an iconic symbol of our Capital City of which we are all very proud; this pride will be further enhanced when the new Luas Cross City commences operations in 2017.”

Brian Brennan, Managing Director of Transdev said: “It is a privilege to operate Luas. Dublin’s light rail network is world class. Its achievements are numerous over the last ten years and it is a key part of the city’s transport infrastructure. I am extremely proud of Transdev staff who deliver daily a service for Luas customers that is easily accessible and extremely customer focused". 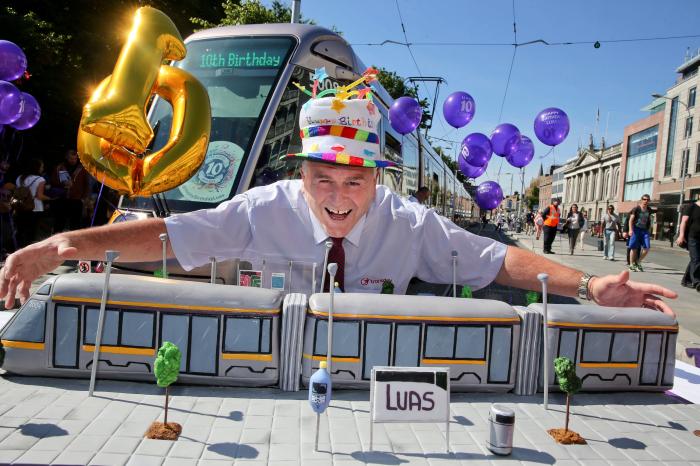