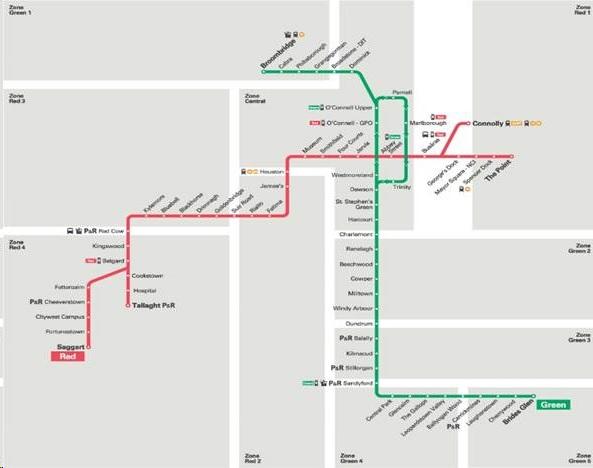 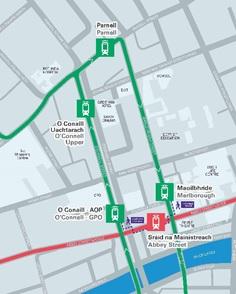 Frequency varies by stop but Luas trams run approximately every 3-5 minutes at peak times and every 10-20 minutes at off-peak times. Find Frequency for each Luas platform at luas.ie/frequency. Real Time Passenger Information is available online, at the stops or on free Luas Apps available from iTunes and Google Play stores.

You must hold a valid ticket to travel on Luas. Children 0-4yrs inclusive travel free. Ticket machines are located at every stop. Leap Card, available to purchase online and in Payzone outlets, can be used on all Luas services. The National Transport Authority have introduced a new Luas Leap Card Off Peak City Centre fare available from the opening of the extension for 1 year. This fare costs €1 for an Adult or Student and 50c for a Child and applies to travel during Leap Off Peak Hours within the following area; Parnell in the North, St. Stephen's Green in the South, Jervis in the West and Busáras / Connolly / George's Dock in the East. Find out more about Luas tickets including the Best Fare for you at luas.ie/ticket-types.

Luas Park & Ride facilities are available on the Green Line (Carrickmines, Sandyford, Stillorgan and Balally) and on the Red Line (Cheeverstown, Red Cow and Tallaght). Find out more about Luas parking at luas.ie/car-parking.

Remember, for the most up to date updates about Luas services visit luas.ie/travel-updates, check News on a free Luas App and Follow @Luas on Twitter.