In parallel with the growth of the city it surrounds, the M50 has been constantly changing over its life from 1987 when construction began on the Western Parkway from the N3 (J6) to N81 (J11). Since then the M50 has been extended, widened, tolled and upgraded at various times to accommodate the unrelenting increase in traffic demand. However, options for increasing capacity are not endless and eventually there comes a point when adding lanes and upgrading junctions is no longer feasible. According to Transport Infrastructure Ireland (TII) who is responsible for the operation of the M50, that day has arrived. 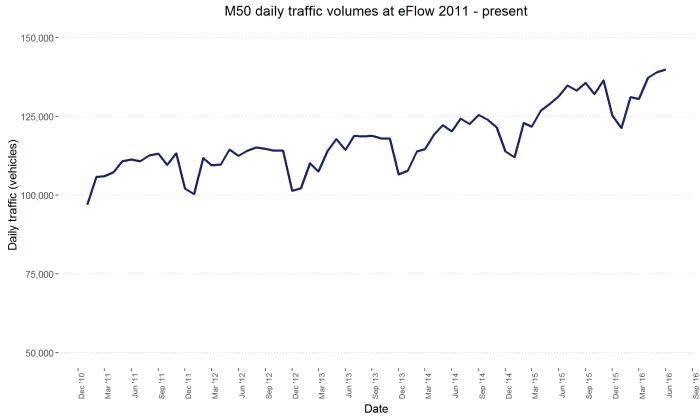 “The Greater Dublin Area has grown so much since the M50 was first constructed that it is no longer a motorway around Dublin – it is now within the city suburbs” said TII. “This means that our response to increasing traffic demand must shift from construction solutions to motorway operations”.

Heavy congestion resulting from traffic volumes of up to 6400 vehicles per hour in each direction and further exasperated by collisions is an almost daily occurrence on the M50 – so what can be done to address this problem? According to TII, incidents are a major contributor to commuter delays with about 120 incidents occurring in a typical month on the M50, over half of them during rush hour traffic. Incidents can include anything from simple breakdowns, or debris on the motorway right up to major collisions involving multiple vehicles.

TII’s road operator contractors respond to these incidents in order to minimise resulting traffic disruption. “The incident response service is on call 24/7/365 and arrives at incidents within our target response time of 15 minutes in over 97% of cases which we think is quite good.”

In addition to dealing with these incidents, TII’s contractors also provide assistance to more than 500 broken down vehicles per month on the M50.

More serious incidents generally require the involvement of many different agencies including An Garda Síochána, Dublin Fire Brigade, the four Dublin Local Authorities, TII and the Motorway Traffic Control Centre. The interface between so many different agencies each with different roles and priorities is quite complex and ensuring a smooth interface is essential. That’s why the various agencies involved came together in 2015 to form the Interagency Incident Coordination Group (IICG).  This group provides a forum for communication between all parties and has developed various initiatives in relation to co-ordination of resources, incident management and identification of potential diversion routes. In addition, the IICG can be convened in the event of a major incident so that the decision makers from each agency can coordinate a combined multiagency response.

One of the first initiatives by the IICG was the development of emergency diversion routes to provide an alternative to traffic in the case of a M50 closure. Signs are in place on all available routes between the M1 (J3) and the Red Cow (J9) and remaining routes are being finalised with the relevant Local Authorities with a view to completing these in the coming months. 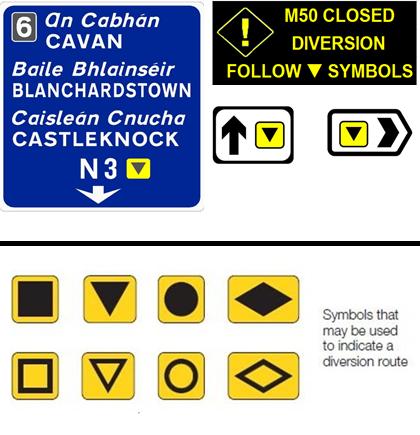 Variable Message Signs (VMS) on the M50 will be used to inform drivers when diversions are in place and each diversion route will be indicated by a specific symbol which drivers will be directed to follow. “But the capacity of these diversions is far less than that of the M50 so these are only a measure to assist in the dispersal of traffic congestion following motorway closures.” warns TII.

In relation to the normal operation of the M50, TII has also been working to identify and address any capacity bottlenecks such as at the merge points where traffic joins the motorway at junctions. These merges were designed and constructed when traffic volumes were much lower but the most efficient lane layout at these locations depends on the traffic volume and with growing traffic levels, a new layout is warranted. Not all junctions are suitable for this treatment but TII has already changed the lane layout at all junctions between Ballymun (J4) and the N3 (J6). While performance of the revised layouts is still being monitored, initial indications are that longer merging layouts result in smoother flows on the mainline.

A further simple measure recently introduced was the provision of a new turnaround facility at the Westlink Bridge which will permit emergency services vehicles better access to incident locations on both carriageways.

With a view to the longer term, TII is currently developing a scheme for the implementation of mandatory variable speed limits on the M50. This is a system where the speed limit is varied to suit traffic and weather conditions in order to reduce collisions and improve journey time reliability. Typically in congestion or adverse weather conditions the speed limit would be reduced from 100 km/h to 80 km/h or 60 km/h and would contribute to the reduction of the ‘stop-start’ nature of traffic which often results in rear end collisions. This scheme requires significant collaboration with An Garda Síochána and changes in legislation and consequently it is envisaged that this scheme could be operational in 2019.

Drivers themselves also have a role to play. Rear end collisions are more common than any other type and simple measures such as drivers maintaining a safe stopping distance could help reduce this number.

In addition, motorists are advised to never stop on the hard shoulder unless your vehicle is disabled. In these cases, you should exit the vehicle carefully, and wait behind the barrier or on the grass verge and phone the Motorway Traffic Control Centre (phone 0818 715 100) or use an emergency roadside telephones if one is nearby.

TII confirmed that in some cases, motorists involved in minor collisions insist on waiting in a live motorway lane until An Garda Síochána arrives at the scene. “This type of behaviour poses a serious risk to the driver in question as well as to other motorists. Where drivers are involved in a minor incident and are uninjured, they should drive to the hard shoulder as soon as it is safe to do so.” TII’s incident response staff will provide assistance to drivers when in attendance.

The current protocol for the management of major incidents on motorways is available for download at the link below.

Photographs courtesy and copyright of www.dulraphotography.com