Transport Infrastructure Ireland (TII) is inviting the public and anyone that is interested to make their views heard on the development of a new National Cycle Network (NCN). The ambitious NCN, a planned core cycle network of 3,500km will criss-cross the country connecting more than 200 villages, towns and cities. The network will include cycling links to transport hubs, education centres, employment centres, leisure and tourist destinations, and support “last mile” bicycle deliveries. The public consultation on the new NCN is open from Wednesday 4th May to Tuesday 7th June 2022. The NCN map, background information, as well as details on how to have your say, can be found online here.

Over recent months, we have been working closely with stakeholders to gather information on existing cycle infrastructure provision and looking for opportunities where new facilities can be developed. Arising from this, plans for the NCN have been developed and we are sharing them for feedback to help us create the best possible proposal.

Following our analysis of public feedback, a final report will be completed in August 2022 on the proposed National Cycle Network incorporating the feedback received. Detailed plans for the roll out of the NCN over the coming years will then be developed. 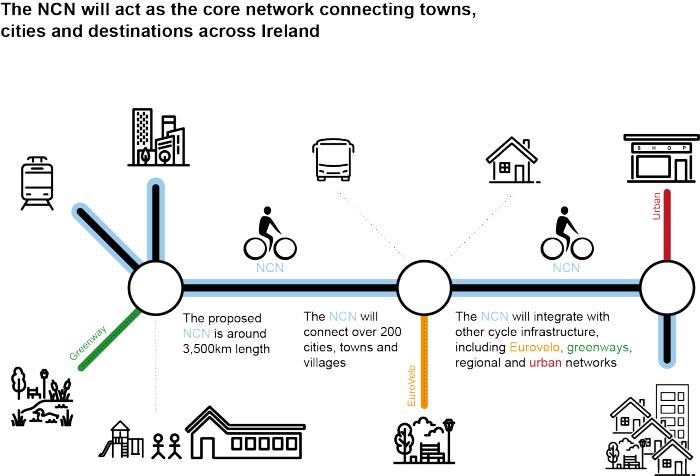 4.05.2022Have your say on the development of cycling infrastructure in Ireland