The Authority is responsible for the maintenance and development of a diverse set of road assets that includes the most fundamental element – the road pavement. Our network pavements are not uniform, the National pavement network consists of over 5,300 centreline kilometres of road. There are 33 National Primary routes and 32 National Secondary routes. Our road pavements are predominately made of layers of flexible materials that are designed to be strong enough to support the loads over their lifespan (c. 20-40 years). In addition, the surface course must also provide adequate wet skidding resistance, acceptable ride quality, generate acceptable noise levels and resist deterioration induced by environmental conditions.

There is a very significant variation across the network under a variety of headings, including pavement construction, pavement age, carriageway width, lane width, geometric design and traffic volumes carried. A large proportion of the network consists of “legacy” roads that may have evolved from historic routes that are often constrained by physical or environmental conditions.

We have built or inherited a network of c. 5400km of roads but like any asset they deteriorate with use.

This scenario has focused agencies to look for better procedures or strategies for maintenance and rehabilitation of the existing pavements. All pavements over time deteriorate as a result of repeated loading from traffic and also by exposure to fluctuations in temperature and moisture content. As they deteriorate, they exhibit a number of fatigue (structural) and functional distress symptoms that are measured as part of an annual condition rating survey. These include:

•The development of wheel track rutting

Following asset management principles, and through the use of a fully functional Pavement Management System, the onset and development of these symptoms is modelled utilising algorithmic relationships that predict the rate of deterioration.

Pavement Maintenance of the road network is undertaken with the following primary objectives:

As part of the Authority’s pavement management procedures, an annual survey of network pavement is undertaken of all national road pavements, utilising an array of electronic, laser and digital video equipment mounted on specialised vehicles. Year on year these surveys measure and record a range of network condition parameters including longitudinal profile / roughness, degree of rutting and skid resistance measurement. The data from these machine based surveys which are geo-referenced is recorded within the Pavement Management System. The data bank can therefore be used to accurately record the measured condition and compare it to previous surveys at that location. Together with recorded traffic volumes the rate of deterioration can be projected to enable a prioritisation of maintenance interventions programmes be established based on best practice asset management principles. 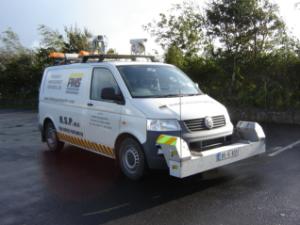 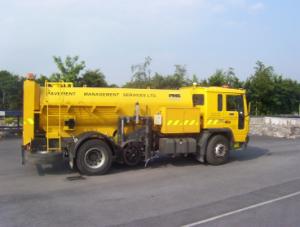 The Authority’s Pavement Management System has been specifically developed for our network by Mouchel / Viagroup, and is based on a system developed in Canada by Deighton since 1983. This system (dTIMS) is used by road authorities in all 5 continents and its use allows enhanced decision-making and management of the network assets using multi-year performance, financial and economic analysis. As we gather more data each year the information available to the system is extended and the resultant prediction models are further refined and adjusted to reflect actual records.

The collection of the data and interrogation of the results is a continuous activity which can be summarised diagrammatically: 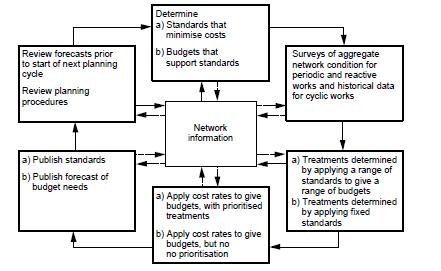 The objectives in terms of preferred outputs can be summarised as follows: 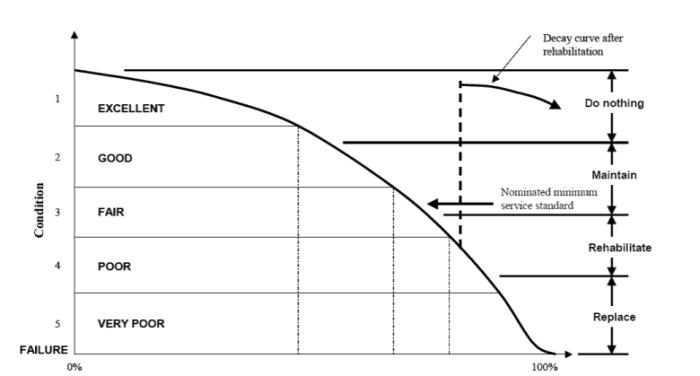 Both of the above schematic deterioration curves reflect not only that the pavement deteriorates with time but also continues to deteriorate even after an intervention of any scale.

Using the data gathered from the surveys the Pavement Management System incorporates software specifically designed to use it in analysis and prediction tools for current and future condition and remaining life time prediction. Also included are modules to assist in evaluating whole life cost analysis for maintenance and construction, deterioration models, assessment of value of the asset, risk based analysis, and prioritisation according to strategies and available budgets. In essence the PMS translates condition data into management information. 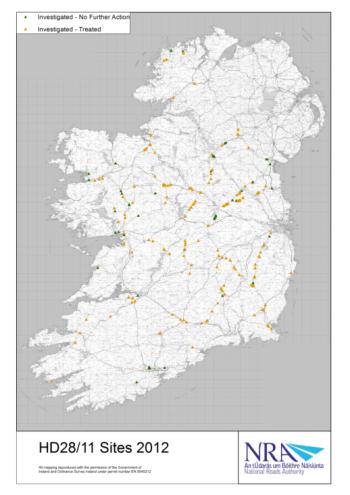 The NRA Skid Resistance policy HD28/11 was published in 2011. The Standard describes how the provision of appropriate levels of skid resistance for national roads will be managed. It details how measurements of skid resistance are made and interpreted. The underlying philosophy is to equalise the risk to the road user across the entire road network. As a consequence, higher frictional resistance is required at sites with a higher risk of vehicle/pedestrian interaction, e.g. traffic lights, approaches to junctions etc. This policy is a proactive approach to the management of the network and assists the Authority in managing the operational demands prior to the risk becoming unacceptably high.

In keeping with the principles of good asset management, resultant from the annual surveys locations at or below investigatory level are grouped into contiguous or “stretched” locations for treatment purposes. Typically most of the site locations identified are short in length, (c. 100M), whereas the contiguous location might be up to 500m to reflect optimal long term efficiencies.  From the sites identified as requiring investigation, the prioritisation procedures outlined above identified in 2012 220 sites for current investigation. This is carried out by a dedicated team with extensive experience in road surfacing and materials specification. The team has been further trained by Transport Research Laboratory, who are UK based and are the preeminent authority on surface materials and skidding resistance measurements and assessment techniques in the world. Based on the inspections for example in 2012 interventions were recommended at 156 sites. Where no immediate intervention was required the segments are still part of the continuous monitoring regime. Typically the risk reduction measures include resurfacing (Surface Dressing and Asphaltic Concrete), or if a structural treatment is imminent it could also consist of resurfacing combined with regulating and strengthening. In other instances retexturing by mechanical abrasion techniques has been utilised and. The graphic to the right shows the location of the sites identified, investigated and treated under the 2012 HD28/11 programme. 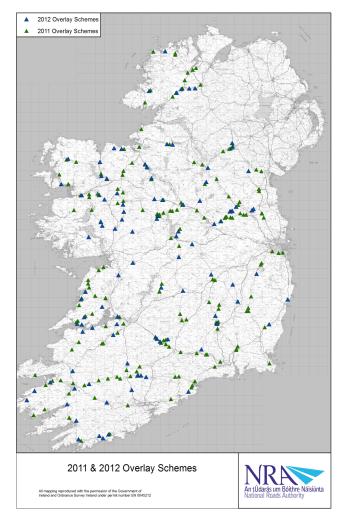 The use of a renewals-based approach is being implemented to direct the maintenance requirements for the period 2013-2016. This procedure requires the establishment of defined levels of service for each of the sub networks based on condition and performance.  Condition relates to the structural integrity of the asset. Performance relates to the capability of the asset to meet a defined service criterion.  The service criteria reflect the sensitivity of the influencing traffic mode to changes in the value.

The Pavement and Minor Improvements (PMI) annual programme plays a key role in preserving the asset value of the national pavement network. Close monitoring of the costs associated with each of the project schemes has allowed typical unit cost values to be derived for the various treatments considered.

In addition to renewing the pavements when they deteriorate the Authority also funds local authorities for a programme of “cyclical” maintenance on the entire network annually. Whereas this type of work may not affect the pavement performance directly, it can have tangible benefits. As an example the cleaning of drains and drainage outlets keeps water levels consistent and helps to prevent saturation of the foundations which could weaken the pavement support and hence reduce its life span.

Although the treatment selection decision making process is complex, it is demonstrated in simple terms in the table below:

The more robust the intervention,  the higher the cost and consequently the PMS uses Life Cycle Cost Analysis to best determine how, where and when to renew the pavement to optimise the budget available.